I’ve got art on my mind a lot nowadays. I think it tends to happen when one hangs out with artists. More specifically, artists who are heavily involved in their faith communities. Naturally enough, immersing myself with people of a certain mentality will cause me to become interested in how they see the world.

A professor of mine who I regard as a mentor remarked that when we do not have the language to name something, we lose the ability to see it. The world becomes a much more complex place when one learns about the atom. Music becomes fascinatingly more complicated when things such a “pitch” and “timbre” are introduced to the mix.

In an analogous fashion, I think that the arts teach us how to see.

I recently got off the phone with someone who sees themselves as a former person of faith. We had been talking for a bit. Rather, they talked, I listened. Every so often, I would drop a question in for clarification.

In the closing moments of the conversation, they cleared their throat and remarked, “You know, I can intellectually grasp the concept of God or some ultimate force in the universe. And yet, my experience would suggest something else entirely; I mean, I don’t feel like it’s true experientially.”

We talked for a little longer before we hung up. As I placed my cell phone on a shelf, I closed my eyes and rubbed the bridge of my nose.

I was surprised, to be honest. Usually, I would rail against the tendencies for Christianity to become an emotional, fun-fueled experience with little to no theological reflection, leaving many people prone to abandoning the faith after they found their version wanting in academia. Here, it seemed, my counterpart was experiencing the exact opposite phenomenon.

The German philosopher Friedrich Nietzsche made a related observation regarding the power of art in one of his many works. He once wrote that he loved art because “we [need it] so that we might not perish by the truth.” For Nietzsche, humanity needed art to create a lie around itself regarding its place and purpose in the universe. Namely, it needed something – a story, an image of significance – onto which it might latch as a manner of hanging on in a bizarre and otherwise unfeeling world. Art, or rather the arts, in Nietzsche’s mind, created for humans an ideal and a lens through which to engage the world that offered some comfort.

Another thinker, Plato, understood the power of the arts as well. In planning his republic of words, Plato stated that the arts were so influential on a person that it was the state’s prerogative to censor art to maintain a good society. Unlike Nietzsche, Plato asserted that art could be more than just a beautiful lie – possibly because he was a premodern thinker while Nietzsche was a postmodern one – but a way to cultivate virtues which meant something in the grand scope of things. Since virtuous citizens make up a good state, a state ought to educate their citizens. It did so by exposing them to good material and shielding them from that which it deems bad.

In both thinkers’ minds, art is a means to an end. It has the capacity to manipulate, inform, and form its observers, regardless of whether it has any bearing on the truth of how things are. It trains and reinforces a frame through which we might see.

I suppose it could also apply to the sciences (e.g., heliocentric versus geocentric models of the solar system) and to education as a whole. However, I’m more interested in narratives which lie generally within the arts.

The thing is, both Nietzsche and Plato understood that there is art that misleads us – whether for our benefit or detriment is up to the thinkers to decide. And yet, we buy into it anyways for one reason or another.

Oftentimes, I think it’s because we are pursuing some form of a Good that we don’t take time to reflect. Are our priorities on our Goods are properly aligned? Do we prefer the proper thing over all else at the moment? Sometimes, it’s that we don’t prefer something as much as we ought. Yet, we cling to certain narratives because they justify something for us.

For me, it’s a sense of security and meaning. However, should it be something else?

Talking to my friend reminded me of this fact as well. I left the conversation wondering whether I cling to a narrative of Christianity because it keeps me from perishing by the truth.

And yet, simultaneously, I wonder how, if the framework of Christianity is the closest thing to getting at what is, we can best experience that which we claim to believe?

I think the arts paint a good picture of what is expected of us, depending on what road one decides to travel down.

You know, moving down any path that art paints for us might just be considered faith.

Whether we choose to move that way in the first place is up to you. 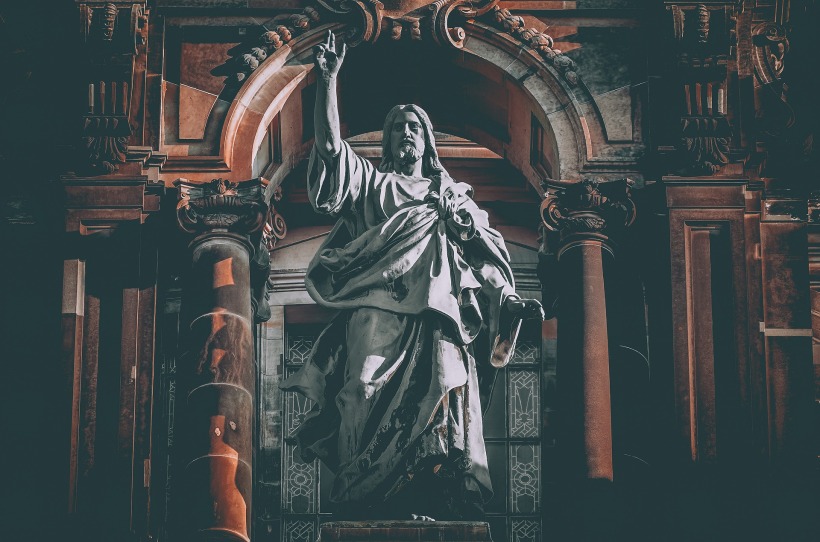 I found myself sitting across from a new friend for lunch the other day. I’ve been in Atlanta for only a week. Everything, really, feels new. Along with the place comes a strangeness of culture, people, accent, even life situation. While this fall is far from my first season of diving into academia, it is the start of a new leg of that journey far from any community that I’ve known.

And with this new season comes a predominant sense of anxiety. Newness, strangeness, is stressful to humans in general as created creatures of habit. Without context for the world around us, we enter into a state that is constantly “on” – taking as much of the environment in as quickly as possible – in an attempt to make sense of it. We do so as a means of trying to regain a sense of control.

While transition is stressful, there is an openness present in the person that is otherwise closed off. The expectation is that there is no expectation. Most, if not all, of our categories and filters through which to see the world have been reset.

Familiarity can breed contempt. Without intention reflection, it can dispose us in this way.  We allow ourselves to be swept along with the rhythms of life, trying to get through the days and weeks to something we’re looking forward to.

To be sure, there is significance and beauty to engaging in regularly repeating activities and disciplines. Just like there is a reason for an athlete to exercise outside of a match, there are reasons for a person to practice for what they hope to be or where they hope to perform.

But for many of us, it can become easy to slide into doing the motions. The meaning fades. The ritual becomes dry and hollow. It is in these moments that we need a shaking-up of sorts.

This was one of the reasons why I found myself at lunch after Ross had found me wandering around the lobby of his church the first Sunday I was in Atlanta.

The thing is, Ross is an artist by trade. A graphic designer more precisely, and a good one at that. However, Ross’ passion rests in helping others visualize their role in the world, often with a theological bent to it. He uses his talent as a means to start the conversation. Naturally enough, it wasn’t long before the soon-to-be-seminarian and the artist’s talk would turn toward that general direction.

Ross was halfway through his salad bowl, munching contentedly. We had been discussing the direction our lives had gone. We mused over places where we thought they were headed as well. Several people had recently connected with Ross because of his art and wanted to begin working with him as well. Ross’ eyes lit up as he speculated what the future would bring.

At one point, I remarked, “Has it ever occurred to you that we need you to help us pray?”

“Well,” I began, setting aside my fork and scratching my chin, “Would you say that the arts intentionally portray something – anything – which is filtered or distorted or focused in such a manner that some message is conveyed?”

Ross tapped his finger to his lips, his eyes gazing beyond me in a pensive stare.

“Yeah, but what are you getting at?”

The poet Emily Dickinson once wrote a poem that advised its audience that one should “Tell all the truth but tell it slant / [Lest] every man be blind.”[1] Those tasked with telling the truth might find that the truth, when presented in the same way, may be so familiar to their audience that their listeners dismiss it, regardless of whether it have the significance of a horoscope or a great work of literature. Something as revolutionary and radical as the truth can be glossed over for a lie which “tickles many ears” and enthralls the masses simply because it is so familiar.

Simone Weil, on a related note, once observed that a form of loving something is fixing one’s complete and utter attention on it. Furthermore, praying is simply the act of paying attention to one’s surroundings, oneself, and to God.[2]

When we lose our expectation and openness, allowing familiarity to dull our senses, we need someone else to remind us again. We need others to recall our sense of wonder, of our reverence, and of our devotion when the motions seem to us as good enough. We need the artist to wrestle with our perceived reality and ways of being in order to communicate some element of it – the good, the bad, and everything in between – even though their manner of doing so may shake us to our cores and make us uncomfortable with where, who, or even what we are.

It is, I think, one of the reasons why the Psalmist invites their audience to “taste and see that the Lord is good.”[3]

It is for the same reason why they also cry out in Psalm 88 in their anguish, failing to resolve their lament like any other Psalm that we have in the canon.[4]

It is for the same reason why the prophets used such wild imagery, like Malachi warning the priests that God would smear fecal matter on their faces for their tepidness and corruption.[5]

The voice of the artist invites us, through disrupting our daily patterns and our assumptions about who and what faith ought to be about, to return our focus back to God and reengage with him in all our humanness.

The voice of the artist, whatever their medium, has the ability to invite us to come. To see. To experience this God of ours.

They invite us to pay attention to the mystery and wonder of the divine.

They help us to pray.

At lunch, I looked at Ross, spreading my arms wide.

“You have a gift from God, for the people of God.”

He smiled. “Thanks be to God.”

[1] Emily Dickinson, “Tell all the truth but tell it slant.”